Just one calling: to love one another

National Reconciliation Week runs from May 27 to June 3 this year. It’s a celebration of the rich culture and history of the First Australians. Initiated in 1996, the week aims to foster reconciliation discussion and activities. You can find out more about it from the Reconciliation Australia website.

In March this year The Uniting Church in Australia held a week of prayer and fasting for justice for First Australians. We called it “A Destiny Together” and it brought First and Second Peoples within the UCA together in a remarkable way.

Information about that week and resources prepared for it are online: A Destiny Together

The week of prayer and fasting was observed by individuals in their own homes and lives, by local congregations and regional events throughout Australia. One of the key events during that week was a public prayer vigil held on the lawns of Parliament House, Canberra. It was attended by representatives of every part of the UCA and by our Aboriginal and Islander members from all over Australia. There’s a short video from the event here.

I thought National Reconciliation Week might be a good time to post my sermon from that event in Canberra.

Just one calling: to love one another (1 Corinthians 13)

“Owe no one anything, except to love one another; for the one who loves another has fulfilled the law.” (Romans 13:8) That’s how Paul sums it up in one of his letters. The command to love is specifically addressed the Christian congregation. It’s about how we must treat each other. The congregation is called to do just this one thing – to love each other. Everything else flows from that.

The love that Paul is writing about is nothing to do with the sentimental, romantic love of popular culture. It’s the love that Christians owe each other in the day to day life of the new community that God is making of them.

And in the case of the Corinthian congregation that day to day life was a mess. In the chapters that come before the one we heard read, Paul called them out on their internal divisions, their jealousy and quarrelling, their inability to manage sexual relationships, their perpetuation of class-based inequities even when they gathered for worship. For heaven’s sake, their internal disputes even had them taking each other to court! (1:10-12; 3:3-21; 5; 6:1-8; 11:18-22)

In this context, in chapter 12, he tries to help them think of themselves as being like a body, with all sorts of different members – every one of which is important to the health and life of the whole. In this body, “If one member suffers all suffer together with it; if one member is honoured all rejoice together with it” (12:26). He tries to get them to think of themselves as Christ’s body. And then he moves into the crescendo of chapter 13.

“Love is patient; love is kind; love is not envious or boastful or arrogant or rude. It does not insist on its own way; it is not irritable or resentful; it does not rejoice in wrongdoing, but rejoices in the truth. It bears all things.” (13:4-7)

These are the ordinary practices of Christian love. Practices that – if we sustain them – will be used by the Spirit to transform our fellowship.

The command to love is specifically addressed the Christian congregation. It’s about how we must treat each other. The congregation is called to do just this one thing – to love each other. Everything else flows from that.

Why? Why would God do this? Because in Jesus Christ God fulfilled his promise to Abram: “in you all the families of the earth shall be blessed” (Genesis 12:3). Why? Because “There is no longer Jew or Greek, there is no longer male and female; for you are all one in Christ Jesus” (Galatians 3:28). Why? Because “God was in Christ reconciling the world to himself” (2 Corinthians 5:19).

God commands us to do one thing: to love one another. Because in doing that we become a sign of what God has done in Christ for the whole world.

That’s why we’re here today. We’ve come to the most public place we can think of to stand together as First and Second Peoples and say, “We’re very different from each other. In many ways we’re very divided. But in Christ we have been made into one body… and we’re in pain.”

The cruel injustice and crushing disadvantage that our members from the First Peoples deal with every day hurts us all.

So we’ve committed ourselves to the task of working towards justice and reconciliation in the church – through our Covenant, through the truth-telling of our amended Constitution, and through all the day to day, practical loving of one another that they imply.

God has commanded us to do just one thing: to love one another. In doing that we become a sign to Australia of what God has done in Christ for the whole nation and the whole world. 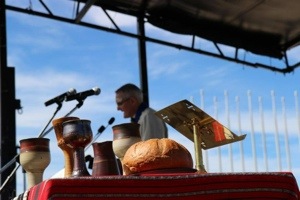 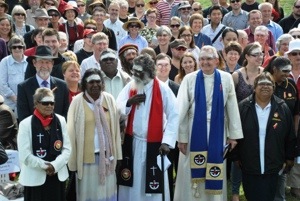