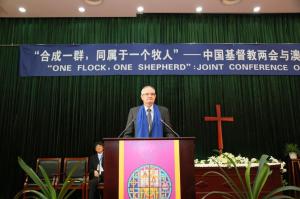 I’m at the end of the first day of a remarkable joint conference between the China Christian Council and the Uniting Church in Australia, in Nanjing. Two post-denominational churches, discovering that they’ve been on the same journey since the late Seventies albeit in very different contexts.

It’s been a long day, but a rich one. I’ll blog some more later, but just thought I’d register two striking things.

1. The UCA delegates have been startled to learn how central to the vision of Australian church union was the determination to leave behind not just the three denominations that formed the Uniting Church, but denominationalism as a whole. It was a deliberate choice to become post-denominational.

2. And we were very struck by how explicit the Chinese delegates have been about their new struggle against denominationalism as a pointless, destructive imposition on the life and mission of the church in China. They’re careful not to criticise western churches’ evangelistic efforts in China, but disagree deeply with the implied policy of re-introducing denominationalism in China. It’s contradictory to the prayer of Christ (John 17) and inconsistent with Chinese culture.

But it’s late. I’ll have more to say later.